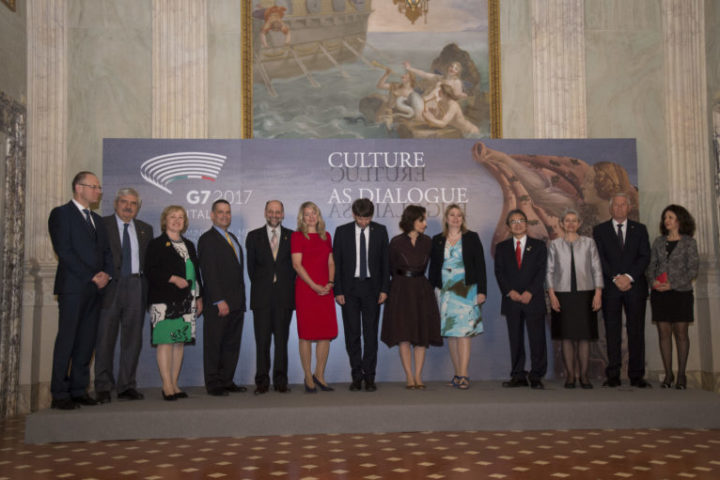 These past 30th and and 31st of March, Florence hosted the first ever G7 of Culture. For the first time, the Ministers of Culture of Canada, France, Germany, Italy, Japan, UK and USA, together with the European Commissioner responsible for culture and UNESCO’s Director General, met in Florence to discuss the distinctive role of culture as instrument for dialogue among peoples as well as the importance of a common action to strengthen the safeguarding of cultural heritage. A selected number of organizations were invited to join the Meeting:  the Council of Europe, ICOM, ICCROM, INTERPOL and UNIDROIT. ICOM was officially invited to take part in the Meeting to contribute as Observer expert on cultural property protection and was represented by Vice President Alberto Garlandini and Director of programs France Desmarais.

ICOM contributed to the expert meetings that discussed the International Law as a tool protecting cultural heritage from the threat of terrorism, natural disasters and illegal trafficking, best practices to prevent illegal import and export of heritage, the importance of cooperation, education and raising of public awareness. The museums’ role in the promotion and protection of heritage has been emphasized by experts and Ministers. ICOM’s Code of Ethics, standards and guidelines such as the Red Lists have been highly appreciated as effective tools to implement existing international legal instruments for protection of the world’s cultural heritage.

This G7 Ministerial meeting was concluded by the signature of the joint Declaration of Florence “Culture as an instrument for dialogue among peoples”. The Declaration expresses a deep concern at the ever-increasing risk arising from natural disasters and crimes committed on a global scale against cultural heritage, museums, monuments, archaeological sites, archives and libraries. The Declaration also stresses the role of cultural relations in promoting tolerance for cultural and religious diversity and mutual understanding among peoples.

For more information about ICOM’s contribution to the conference.