Oil Paintings – Cuzco and Quito
These paintings were produced in the ancient viceroyalty of Peru during the Colonial period (16th, 17th and 18th centuries) in workshops that carried out custom-made orders, which at times were destined for distant places. They tend to be anonymous, though there were well-known painters from Cuzco such as Diego Quispe Tito and Basilio de Santa Cruz, or the Bolivians Melchor Perez Holguin and Leonardo Flores. These painting are oils on canvas although some are made on wood or copper. Their size ranges between 60 cm and more than 2 m in height. They portray religious themes with a tendency to represent a central figure that can be surrounded by angels or secondary characters. This explains the simplicity of the composition with few figures and many detailed accessories. When there is more than one figure, they are in one or two foregrounds, avoiding a composition with perspective. The perspective is usually absent or very simple. There is an inclination for neutral backgrounds and gold is often used in the backgrounds, garments, and crowns. Sceneries are minimal and when they appear, they are perfected and idealized, being copies of engravings and not very natural with meticulously painted flowers. They are characterized by a taste for flat and primary colors with few variations in tones. There is a preference for golden tones and lack of interest for perspective and composition. There is an interest in details and small flowers, and in the case of small paintings they are set in elaborated gold frames with complex engraving and mirrors. All of theses characteristics bestow the paintings a unique style and an original aspect. The themes are those of religious iconography: Christ crucified, the Virgin Mary with Child richly dressed and crowned, Saint Joseph and Child, the Virgin child spinning, Santa Rosa of Lima dressed in nun garments with a crown of roses. A special version of the Holy Trinity is frequently seen in which the three Divine beings represented as the same person (a young man with a beard) or they can be summed up in one figure with three faces. Also typical are the angels that were very popular and widely influential throughout Bolivia and Peru. These paintings, which measure between 1.2 and 1.6 m, often represent a single angel with high-heeled footwear and wide, flowing robes adorned with lace and flowers that imitate idealized Roman clothing. They appear in diverse forms frequently wearing hats, armor or harquebus. 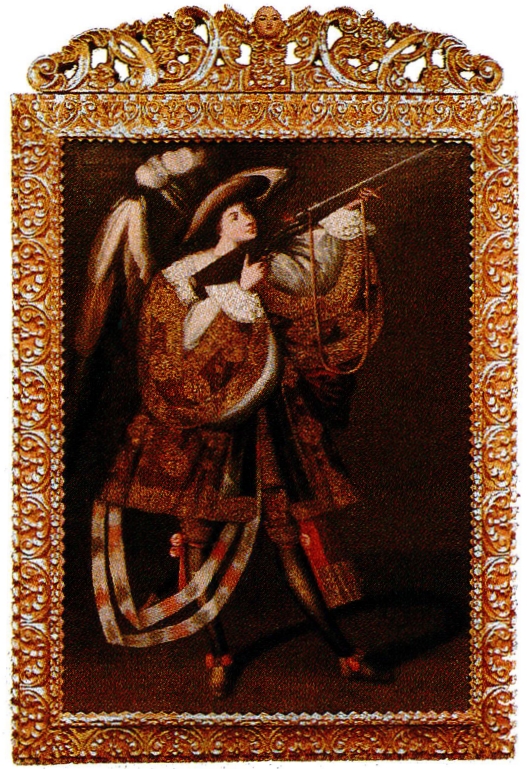