Vegetal Fiber Sculptures
Corn-Stem Paste Figures. According to chroniclers, indigenous populations from Michoacán developed the original technique for crafting corn-stem paste figures. These figures were also made in Xochimilco and central Mexico and then distributed to the rest of the country, Spain and probably other places in America. They date from the Viceroyalty period (16th to 18th centuries). Sculptors of this type of art, such as members of De La Cerda family, became well-known. They were made for religious purposes and were generally found in churches, convents, chapels and other places of cult where they can still be seen nowadays. They are also part of private collections and museums. Their size varies, ranging between 25 and 30 cm in height and they can measure up to 2 m. Common pieces depict different moments of the Passion and Crucifixion of Christ. Images of the Virgin in her various representations are also portrayed. The depiction of Jesus Christ is extremely dramatic, with a particular emphasis on the suffering. The Christ is portrayed bleeding, with carefully drawn wounds and torn skin at the knees or other parts of the body that occasionally show a bone. They are extremely light due to their composition; they are made of a hollow wire frame covered with paste. The frame was crafted with paper tubes or light woods such as colorin wood and pinewood. The paste, also used to model facial features, was made from a mixture of sugarcane pulp and glue. These items are lightweight, porous and fragile, which differentiates them from wooden sculptures. 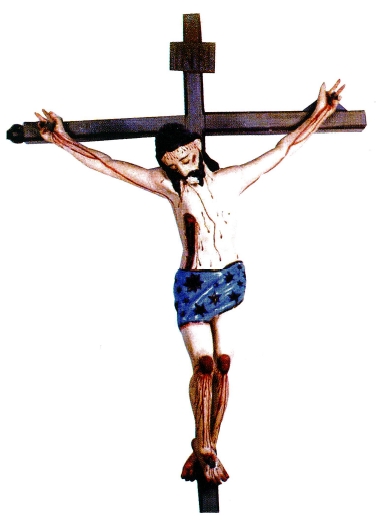