Liturgical Silver Objects
Silver Crafts. Liturgical silver objects were of great importance in Colonial Latin America (16th to 18th centuries).They include sacred vessels used in Mass or other ceremonies such as chalices, ciboriums, monstrances, flagons or host containers, and other objects that compose the trousseau of churches, such as candelabra, vases, salvers, lecterns, tabernacles or frontals for the altars. Ornaments worn by sculptures are also included, with particular emphasis on crowns. The chalice is a cup with a tall stand and a richly engraved base used to drink wine during Mass. The ciborium, used to hold the consecrated host, is a big, wide glass with a cover. Both can measure between 25 and 50 cm. Monstrances are safekeeping pieces that serve to hold and expose the consecrated host (Holy Eucharist) for public veneration. They have a small circular medallion where the Eucharist is placed, which is usually surrounded by beams (like sunrays) and a stand with a wide base. Monstrances can measure between 25 cm and 1 m. They are entirely or partially made of gold-plated silver. They are decorated with images of saints, crosses, floral motifs or vine leaves. Sometimes, they are enameled or inlaid with precious jewels and pearls. Other objects found in the trousseau of churches such as lecterns, frames, candelabra, and vases are usually made of embossed and chiseled silver sheets with high-relief decorations. Frontals are elaborate silver sheets that cover the high altar. The largest are composed of silver panels with a wooden core attached to the altar. Frontals can measure 1 m in height and 3 m in length. Each panel measures approximately 45 by 45 cm. Also seen are the frontal medallions that are smaller sheets or panels, of approximately 23 by 24 cm, which adorn altars of lateral chapels in churches. They are decorated with flowers, vegetable motifs, birds and animals. Central panels contain images of devotion, cherubs or lettering that abbreviates the different denominations of Christ or the Virgin. A few examples of decorations used for sculptures are circular halos appearing above the heads of the saints, rays coming out of the hands of some Virgin Mary statues and, particularly, crowns covered with pearls and jewels. Silver objects can be partially or entirely gilded, so that they appear to be of gold - although fine gold plating can also be worn out as a result of usage. 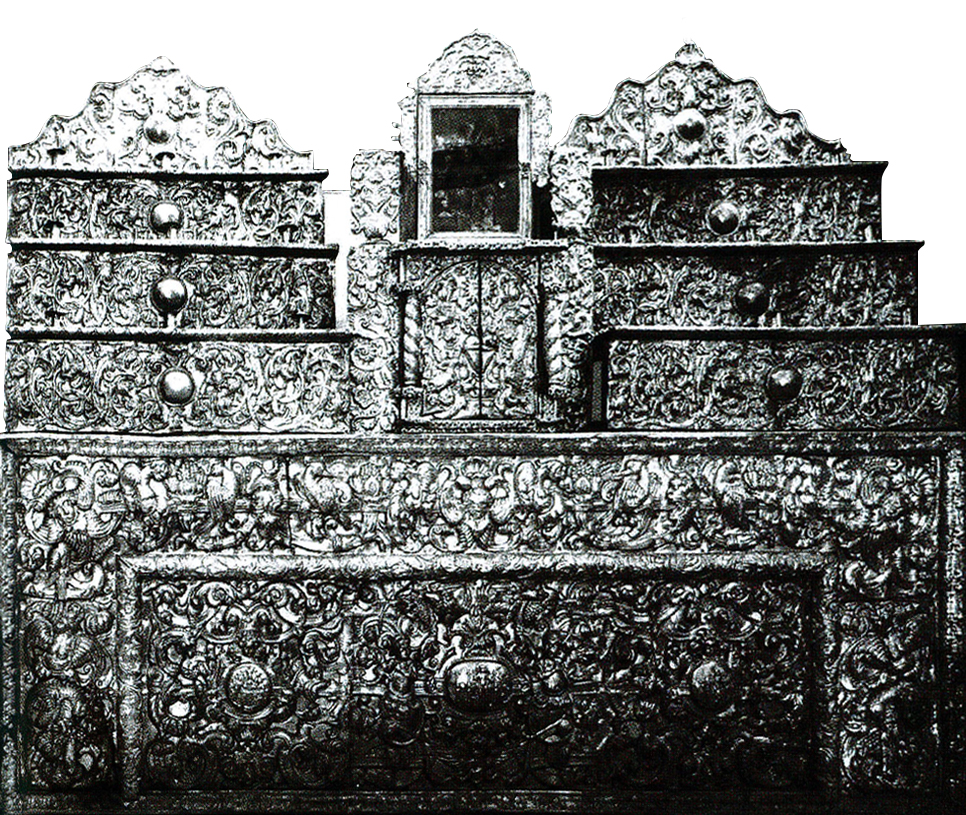