Snuff Trays
Snuff trays are ritual utensils from northern Chile (the Arica, Calama and San Pedro de Atacama regions) that are also found in southern Peru, the eastern foothills of the Andes (La Rioja province in Argentina) and southern Chile (up to Coquimbo). Approximately 300 snuff trays have been found up until now. Those found in the Arica region (Chile) range in date from 500 BC to 1000 AD whereas the San Pedro (Chile) ones date from 250 BC to 1050 AD. Snuff trays reached their apogee during the Tiwanaku period (500-900 BC). Snuff trays were used for the inhalation of hallucinogens. They are small rectangular tablets with a shallow middle part and one or more extensions. They measure between 10 and 30 cm long and are made of ‘algarrobo’ or ‘chañar’ wood native to northern Chile. Snuff trays made of stone, bone or shells have been found In the Arica region. Their shapes and decoration resemble those of the wooden snuff trays. Methods of execution of wooden snuff trays include low relief, multi-level carving and sculpture in the round. They feature incised geometrical patterns such as zigzags, lines, half circles, triangles or ladders-like motifs. The main ornamental motifs are found in the handle and they usually depict human figures, animals, heads or abstract forms. Human figures are shown as profiles or from the front, kneeling or lying, with or without wings, with or without head-dresses. The most common representation is the Decapitator or Executioner that holds a decapitated head by the hair. Animal motifs include felines, birds (such as the condor), camelids and snakes. They are also inlaid with gold, shells or semi-precious stones such as malachite, turquoise and azurite. It is important to point out that snuff trays come with implements for taking snuff that include tubes, spatulas, mortar and pestle, small boxes and bone tubes with burnt decoration. 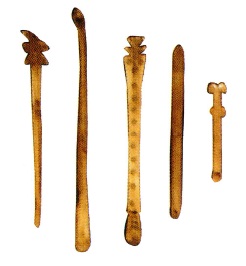