Maya Polychrome Vessels
Maya culture extended throughout the Yucatan Peninsula, the state of Chiapas in Mexico, Guatemala, Belize and western Honduras. Fine Maya polychrome ceramics come from tombs of high-ranking personages dating from the Classic Period (250 to 850 AD). Maya vessels have a wide range of shapes and styles. The most common are cylindrical vases and large plates with supports and lids. Cylindrical vases are between 12and 30 cm high and dishes are between 20 and 30 cm in diameter. These objects’ painted decoration is set against a white or cream stucco layer or an orange background. Black lines or incisions are used for sketching. Different shades of red and orange are customary, as well as white, cream, black, pink and blue. The most ancient vessels, which at times feature modelled decorations, are red and black on an orange background. The best-known and most popular vessels are those featuring human figures with scenes and hieroglyphs. Religious and political ceremonies are the most common themes. There is usually a high-ranking figure wearing lavish dress, standing or sitting with crossed legs over a throne or a ceremonial bench. This character is surrounded by secondary figures such as warriors, servants and prisoners, which are usually portrayed in a standing position. Hieroglyphic inscriptions explaining the scene are commonly found between the characters. There is a group of vessels known as ‘Codex style’ vases that feature detailed inscriptions in black on a cream background, very similar to those appearing in Maya stelae and codex. 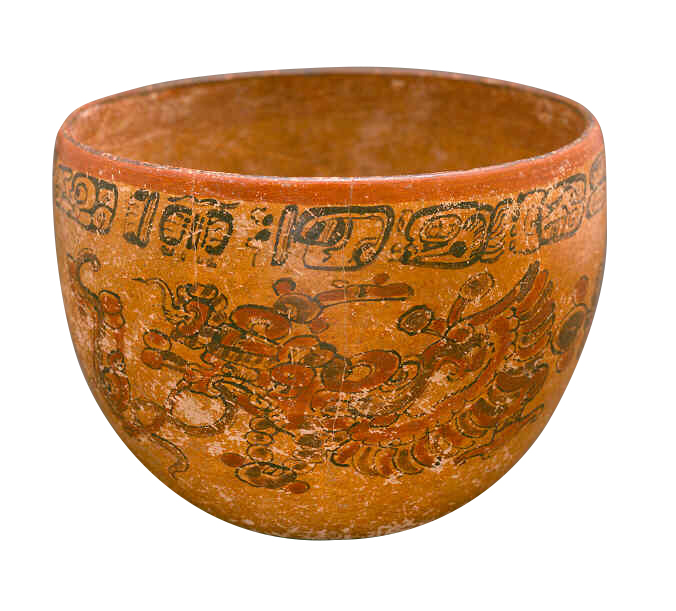