Textiles – Feather Weavings (Nasca, Chimu and Wari)
Feather weavings were crafted over a long period of time in diverse regions of Peru. The Nascas (100 BC to 700 AD) are from the Nazca valley (southern coast), the Waris (700 to 1000 AD) from the area of Ayacucho (south central) and the Chimus (1100 to 1500 AD) from the states of La Libertad and Lambayeque (northern coast). The pieces have been discovered in funeral bundles or as offerings at burials. They can be rectangular cloaks, bibs, unkus (shirts made from a single textile with a central opening for the head and sewn on the sides), headpieces, fans, hangings, and even head trophies. The weavings measure approximately 1-1.3 m in length and are 60-90 cm wide. Nevertheless, smaller pieces exist as well as those measuring over 2 m in length. Feather weavings are made with natural cotton or wool textiles on which small, brightly colored feathers are sewn. The feather tips are placed in tight and orderly rows until they cover the entire surface. Colors vary and range from greens, turquoises, yellows, red oranges, black and white. Nasca feather weavings represent monumental geometric compositions featuring rectangles, ladder-like motifs, chessboard squares or zigzags and concentric circles. Some pieces also include characters with schematic arms and extended legs, and sometimes with animal features. Felines and a standing winged figure holding a cane are the main themes in Wari feather weavings. Characters are dressed in tunics decorated with colored squares arranged in columns. These representations are accompanied by head trophies or abstract symbols such as ladder-like motifs. Chimu textile pieces contain several characters facing frontward with extended arms holding canes that sometimes appear to be seated under roofed structures or on scaling or stair-cased platforms. Another frequent motif is an animal named "dragon" with appendages on its head, nabbed body and curled tail, which is represented as a profile or in a sitting position. The Chimu subject matter also deals with themes based on coastal flora and fauna. There is also a wide variety of animals used, especially felines, llamas, alpacas, snakes, birds, and fishes. There are also feather weavings covered with small sheets of silver and gold. 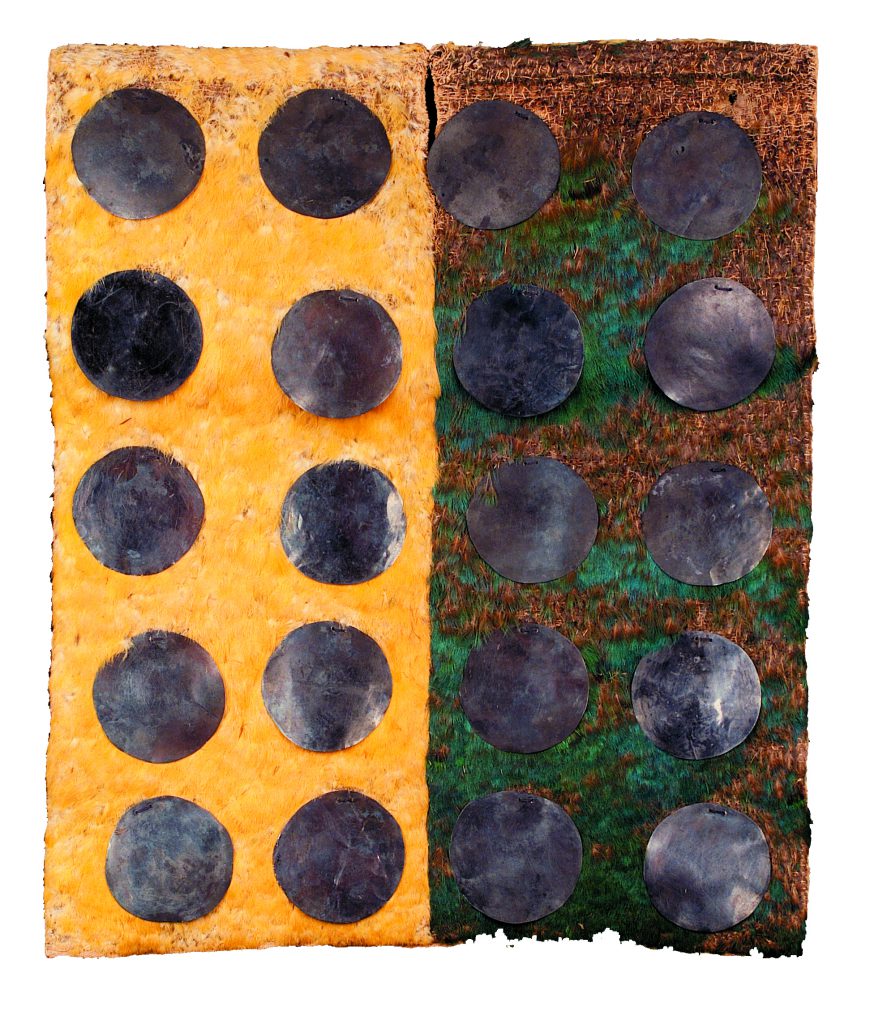