Eagle Pendants
These pendants of birds with extended wings are known as “eagles” or “little eagles”. They are mostly found in areas with silver deposits such as southern Costa Rica and northern Panama’s Gran Chiriquí region. They have also been found in smaller quantities in other regions of Costa Rica. Eagle pendants are usually issued from funeral sites and they range in date from 400 to 1550 AD. They are made of gold and a gold and copper alloy known as tumbaga, which accounts for the green oxidation spots and rust damage displayed by some of the pieces. They have been crafted using lost wax casting and hammering techniques. They feature false filigree decorations (gold wire is not twisted and soldered to the surface but laid in the mould), and embossed dots and lines. They measure between 2 and 15 cm in height and their weight varies according to their size and the material they are made of, fluctuating between 0.5 and 250 grams. The eagles’ body is slightly bulky with tiny claws, extended wings and a triangle-shaped tail resembling flat leaves. The head has a curved beak and a crest. The eagle’s features are depicted with varying degrees of detail. Other small pendants made from the same material are in the shape of human beings with a crocodile mask or head, nude human beings wearing spiral ear spools, animals such as frogs, insects or felines with a long raised tail, circular gold leaves, bells and necklace beads. 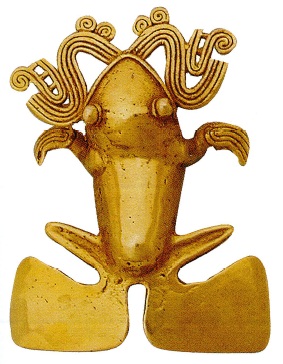