Tumaco-Tolita Masks
The terms “La Tolita” (in Ecuador), "Tumaco” (in Colombia) or "Tumaco-Tolita" cultures refer to a set of pre-Columbian artifacts that have been discovered in the area comprised between the river mouth of the San Juan River in Colombia and the San Mateo Bay, in the extreme northwest of Ecuador. It is characterized by the quality of the gold work, from which gold masks stand out. They date from 600 BC to 200 AD. The specific places of origin are unknown because they have not been discovered by means of scientific excavations. Nevertheless, it is known that they are associated with the burials of high-ranking personages and they are recognizable on the surface by the artificial mound of dirt or tolas with which they have been covered. Generally, the masks are made of gold or tumbaga, a gold and copper alloy of golden color. The dimensions vary but have an average size of 17.5 cm long and 13.6 cm wide. They are made of one or more thin plates that have been hammered and embossed. The most common ones have the form of a human face, with a rounded form and the top part cut horizontally, and sometimes with openings in the eyes and the mouth. They have simple features, with varied details according to the pieces. The most characteristic elements are almond-shaped eyes, a wide nose, and a thin, horizontal mouth. The eyes are embossed on the plate or formed by separate plates attached to the mask by wires. The masks can also have ear spools and nose ornaments. Small superposed or hanging plates that form features
or adornments are typical. Smaller masks also exist and are used as pectorals, characterized by animal forms, generally a feline with big fangs and the lack of openings. They are plates with embossed features and narrow bands cut from the sheet projecting like sunbeams or feline whiskers. 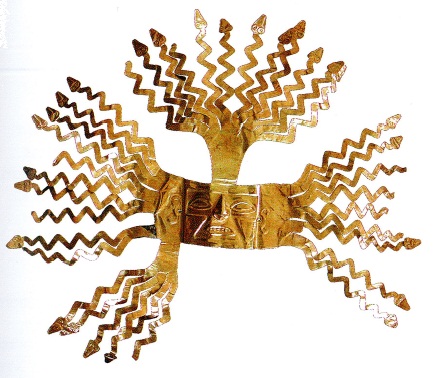