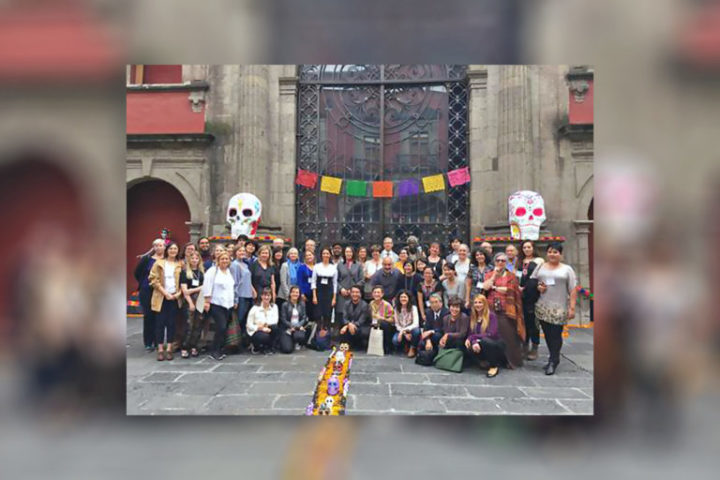 Professor and Carmony Chair of History, Indiana University, US

On 30-31 October, Mexico’s Palacio Nacional—its courtyard decorated for that nation’s annual Dia de los Muertos commemoration—provided the backdrop for the annual conference of CAMOC, ICOM’s International Committee for the Collections and Activities of Museums of Cities.

With 50 presenters representing more than 20 countries, this year’s CAMOC meeting proved one of the group’s largest and most diverse to date. The programme committee’s chosen theme, “Museums of Cities and Contested Histories”, was both broad enough (in its global relevance) and specific enough (in its intellectual focus) to draw participants into dialogues that extended easily from formal paper sessions to coffee-break chat and, especially key for the members of this group, organised tours and informal city walks.

As has been true of all CAMOC conferences, the host city itself was the meeting’s most important participant. Just over a month prior to the meeting, Mexico City suffered one of its largest and most damaging earthquakes in years, with more than 200 fatalities in the metropolitan area alone. With one of the conference’s intended meeting sites—ENCRyM, the National School of Conservation, Restoration, and Museography—no longer able to provide meeting space (though the school continued to supply the conference with valuable equipment and labour), the National Museum of Cultures, just off the Zocalo in one wing of the 18th-century National Palace, hosted the full two days of proceedings, as well a preconference workshop, “(Im)migration and Arrival Cities”, sponsored in cooperation with ICOM’s three-year “Migration:Cities” project. Walking to and from this historic site, or journeying on foot or public transit to and from the meeting across a metropolitan area of more than 21 million people, conference attendees absorbed first-hand knowledge of one of the planet’s most extensive, complex, and historically rich urban landscapes. Since its 2010 publication, Canadian journalist Doug Saunders’s book Arrival City: The Final Migration and Our Next World has offered a key text for thinking about the global movements and migrations that have fuelled today’s contested city. Saunders’s presence as keynote speaker (for both the conference and the preconference workshop) proved a valuable goad to participants thinking about what museum professionals in places as diverse as Madrid and Vanuatu, Chicago’s West Side and Kyoto, might share in their efforts to represent urban change and promote creative responses to the challenges of our time. Saunders reminded his audience that the world is roughly halfway through the “largest population shift in the history of humanity”—one that has taken humans from countryside to city—with some nations having nearly completed that process. He cautioned that much of this transition remains unnoticed, uncounted, and unaccounted for by political and cultural elites; informal urban settlements and edge cities, often with few or no urban services, have and will continue to provide an essential, if often invisible, point of arrival for newcomers seeking to make their way toward new opportunities.  City museums, Saunders noted, increasingly reflect the importance of these otherwise under-recognised communities to the livelihood of 21st-century metropolises.

Session papers helped to prove Saunders’s point, and to attest to the range and vitality of the work going on in museums of cities across five continents.  From Mexico, Marco Barrera Bassols, Jesús Antonio Machuca Ramirez, Ana Karina Puebla Hernández, Cintia Velázquez Marroni and Rosa Viviana López Ortega all introduced conference attendees to the challenges facing cities—and museums—in the host country, a place that counts, according to Barrera, nearly 20 million internal migrants.  Case studies from central Canada to Argentina placed Mexico’s challenges of urbanisation and migration in a hemispheric context, while presenters from Madrid and Barcelona offered Iberian parallels to the creative work of the Mexican city museum professionals.

City museums from Asian and African cities—including Kyoto, site of ICOM’s upcoming 2019 General Conference—were well represented at the meeting, while speakers from European city museums from Belfast to Moscow showed the variety of possible responses to the needs and interests of their constituents.  From urban gardening in Lisbon to a safe space for “unsafe stories” in Amsterdam to an Istanbul institution built on the legacy of an assassinated journalist, their ventures shared a willingness to set aside the conventions of museum practice in the interest of responding more directly to the changing cultural, political and environmental needs of urban populations. As if to clear more space for the discussion of those new means and practices, CAMOC Secretary Afșin Altayli led a group exercise, midway through the meeting, on behalf of ICOM’s new committee on Museum Definition, Prospects, and Potentials (MDPP). Participants broke into small groups to discuss their ideas about the current needs and future prospects both of museums, as an institution, and of their respective home countries. The results of the exercise, to be added to summaries of similar discussions to take place at other ICOM committee meetings, will inform the initial work of this new committee as it reports back to the organisation.

Perhaps the most affecting summary of this promising but fraught moment in the lives of both cities and their museums came from CAMOC member and Danish museum pioneer Jette Sandahl, who argued that “there is no such thing as a neutral place” in our culture—museums included.  Museum professionals tend “to underestimate the ties between museums and the status quo,” Sandahl said,  adding that the challenges of “decolonising one’s mind” and “de-pathologising opposition” await anyone who hopes to apply the museum’s tremendous potential for social good to those very “contested” histories that brought this group from cities across the world to Mexico’s shaken, but enduring, capital.