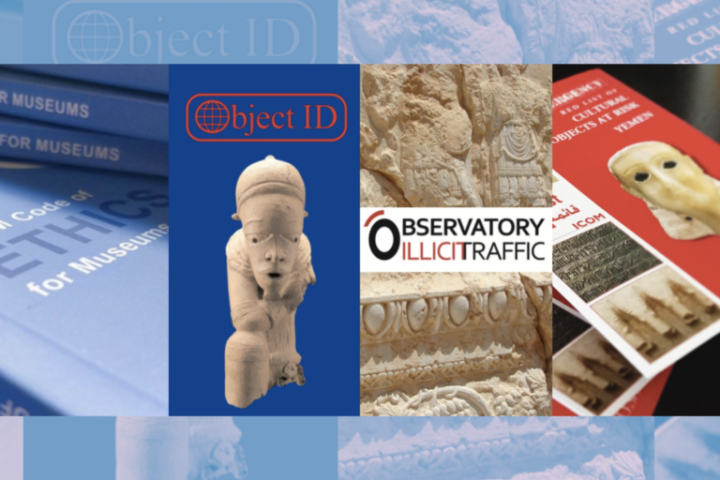 November 2020 marks the 50th Anniversary of the 1970 UNESCO Convention on the Means of Prohibiting and Preventing the Illicit Import, Export and Transfer of Ownership of Cultural Property

Between 16 and 18 November the Online Conference Cultural Heritage and Multilateralism: Regional and International Strategies for the Protection of Cultural Heritage took place. ICOM President Alberto Garlandini joined several Heads of Organizations such as ICCROM, UNESCO, UNIDROIT, UNODC and WCO to celebrate the anniversary and renew their common commitment to protect the world’s cultural heritage. ICOM was also participated in round tables around the topic.

See also the interview of ICOM Head of Heritage Protection Department published for the occasion:

The Head of our #HeritageProtection Department, Sophie Delepierre, explains why the UNESCO 1970 Convention is an important tool for the international cooperation between museums 👉 https://t.co/auVdFuwt3q

This celebration is also the occasion to recall the close partnership established between ICOM and UNESCO on this topic, and the work that has been done up to now by the museum community to stress the need for a continuous cooperation at international level.

The conservation of cultural heritage for the next generations represents a real challenge and the fight against illicit trafficking of cultural property is certainly one of the most complex. In the last decades, thanks to its global network of experts, ICOM has produced effective tools, and technical, scientific and ethical standards to help the international community achieve this goal. Let’s discover them together.

Since 2000, ICOM publishes the Red Lists of cultural objects at risk. These lists exist to help identify the categories of cultural property that are particularly vulnerable to looting and theft. The main goal of this tool is to facilitate the work of police and customs officials, as well as to raise awareness among the general population and those involved in the art and antiquities market. The Red Lists draw their attention on categories of vulnerable objects, raising a flag and requesting increased attention regarding the provenance and the necessary documentation.

Take a look at our dedicated Twitter Moment
to discover more about ICOM Red Lists!

To identify the objects and create the categories, ICOM Secretariat cooperates with art historians and archaeologists from a specific country or region. Their work is to ensure that the objects included in the Lists reflect both present and possible future trends of the art market. The Lists are both flexible and non-exhaustive but share the common point that all the categories identified must be protected by national legislation or bilateral agreements. None of the objects illustrated in the Lists have been stolen: they are all inventoried and part of national collections.

In the Red Lists Database on our website it is also possible to search directly among the 17 existing Lists as well as their translations. The ICOM Heritage Protection Department is currently working on the 18th Red List which will be a regional one dedicated to the South-East Europe. No less than 10 countries are collaborating in its preparation.

Another tool available for general public and experts is the International Observatory. Launched in 2013, it serves as an information databank gathering thousands of resources regarding illicit traffic in cultural goods and the means to fight it. The Observatory also works as a permanent international cooperative platform. Its major objectives are to improve monitoring methods, data gathering and scientific research and to foster the exchange of good practices. And it also plays an important role in raising awareness about illicit traffic in cultural goods.

Object ID is the international standard for describing cultural objects, to facilitate their identification in case of theft. It includes measurements, the medium or materials used, the theme, maker/artist and any distinguishing features, as well as guidelines on photographing the item.

The Object ID project was initiated by the J. Paul Getty Trust in 1993 and the standard was launched in 1997. In October 2004, ICOM signed an agreement with the J. Paul Getty Trust for ICOM’s non-exclusive worldwide use of the Object ID standard. It has been promoted by ICOM and its institutional partners since then. Inventories and documentation are key words of utmost importance while speaking about the fight against illicit trafficking of cultural property.

The ICOM Code of Ethics for Museums, recognized as the main international standard of museum practice and heritage management, also includes dispositions related to heritage protection in general and fight against illicit trafficking of cultural property in particular. For example, some provisions give clear indications regarding acquisition (2.1), provenance and due diligence (2.3) and documentation (2.20).

Another key word to combat illicit traffic is cooperation, and ICOM seizes any occasion to recall the need to ratify and implement the existing international conventions, such as the 1970 UNESCO Convention and the 1995 UNIDROIT Conventionon Stolen or Illegally Exported Cultural Objects. These texts are the two main pillars upon which we can build an operational fight against illicit trafficking. On operational level, ICOM is also a partner of the INTERPOL or the World Customs Organization. 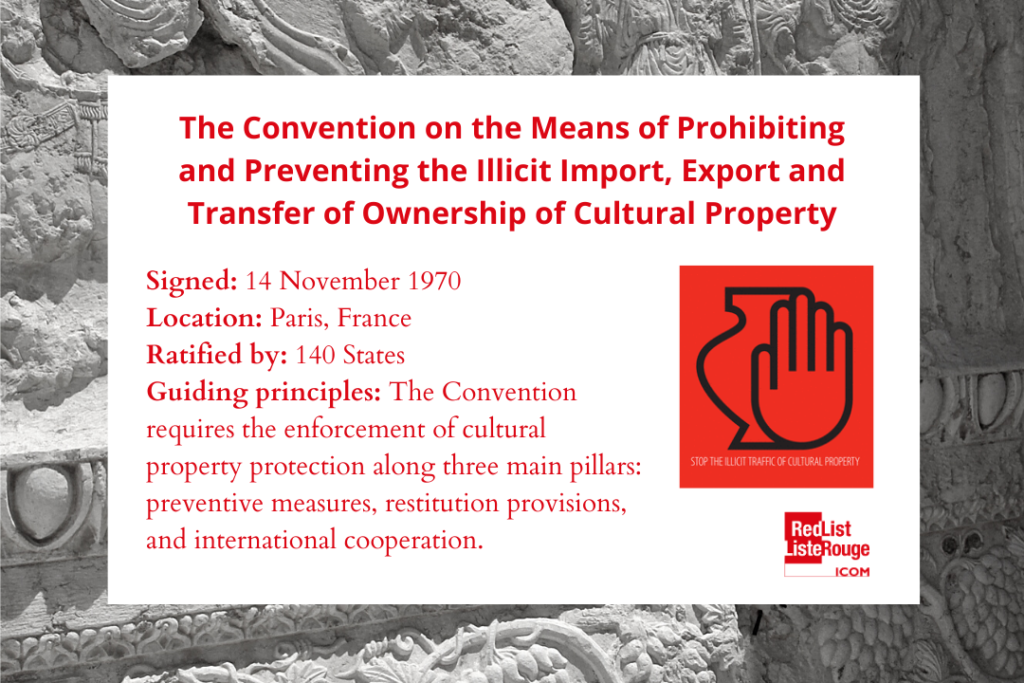 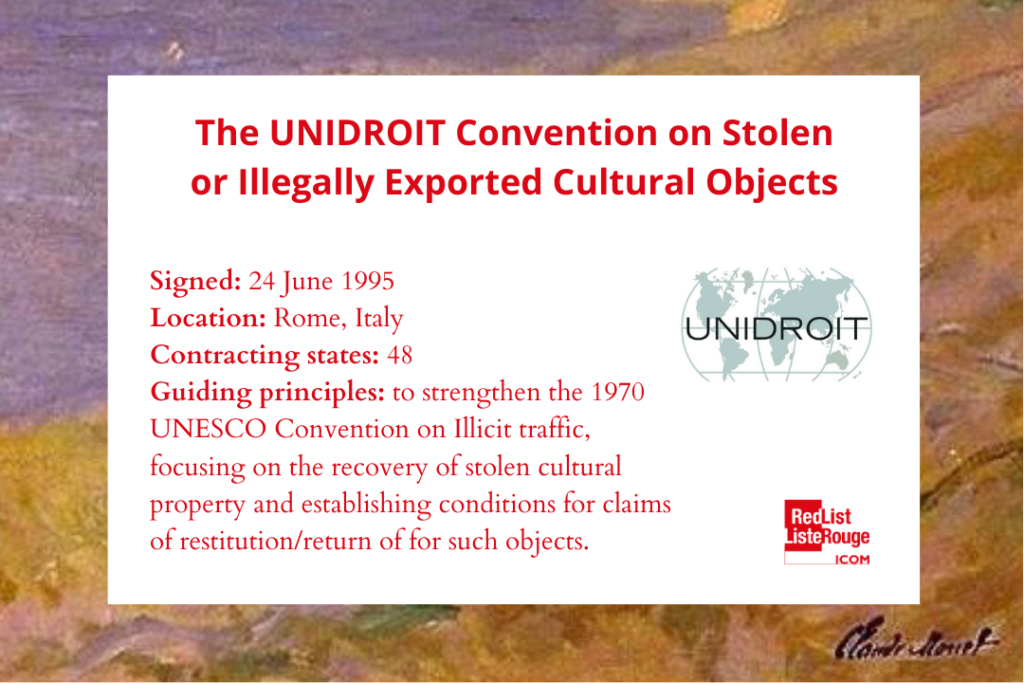 As these partners, the ICOM expertise in Heritage Protection is frequently requested to participate in academic programs, professionals trainings, multidisciplinary workshops to name of few.

National involvement and international cooperation are key elements in the protection of the cultural heritage. This is why ICOM relies on its national committees and uses its regional and international networks to fight more effectively against this traffic, because we believe that beyond the museum world, this mission is everyone’s responsibility.