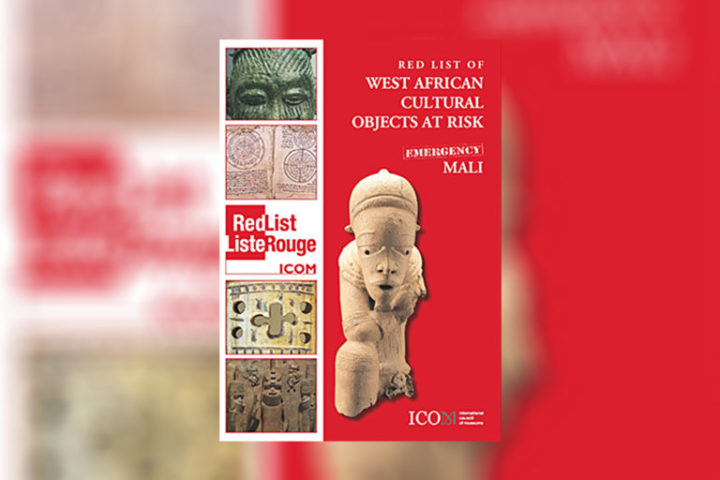 In response to the conflict in Mali in 2012, and in order to fight the looting of West African cultural heritage, the International Council of Museums (ICOM) is publishing a Red List of West African Cultural Objects at Risk, including a Mali “Emergency” section. This publication was made possible thanks to the support of the Swiss Federal Department of Home Affairs, the West African Economic and Monetary Union (UEMOA) and the U.S. Department of State.

The Red List of West A frican Cultural Objects at Risk aims to highlight the types of artefacts that are in demand on the art and antiquities market, protected by legislation, and vulnerable to being looted, stolen or illegally exported. Individuals or institutions wishing to acquire cultural goods from this part of Africa are strongly encouraged to pay close attention to the provenance and legal documentation of any such objects. In the event of any doubt as to the legality of a transaction, buyers should abstain from acquiring the object.

In addition to its production of the Red Lists and its ongoing cooperation with customs and law enforcement agencies around the world, ICOM continues to operate systems of surveillance for emergency situations through its Disaster Relief Management Committee (DRMC) and to fight illegal trade of cultural goods, particularly through the establishment of the International Observatory on Illicit Traffic in Cultural Goods in 2013.

This Red List is published in English and French. A German version is being prepared to adapt to the different regions concerned.

The Red Lists classify the endangered categories of archaeological objects or works of art in the most vulnerable areas of the world, in order to prevent them from being sold or illegally exported. They therefore contribute to the protection of cultural heritage in the countries concerned. These tools are transmitted to police and customs officials worldwide through INTERPOL and the World Customs Organization. They are also distributed to museums, auction houses and art dealers.

With more than 15 ICOM Red Lists concerning 25 countries, it is easy to imagine how many illicitly trafficked objects could be seized should the Lists be used consistently by law enforcement officials at the world’s largest ports of entry.

New Lists are currently being developed, namely for Yemen and Southeast Europe.

Though protected by various national laws and international treaties, West African cultural objects are in high demand on the art and antiquities market and are thus at risk of being illegally traded. The recent conflict in Mali also highlighted the need for a new Red List for West Africa, particularly in light of the risks to manuscripts and of the looting of sites in the north of the country. ICOM therefore included in this Red List an “Emergency” section specifically dedicated to Mali.

The unveiling of the Red List was held on Friday 16 December at 10 am at the National Museum of Mali under the High Patronage of the Minister of Culture Mrs. N’Diaye Ramatoulaye Diallo.

For information on ICOM, its action against illicit traffic in cultural goods and its Red Lists of cultural objects at risk, we invite you to contact the ICOM communications and PR department.