Urns from the Amazon River Region

Urns from the Amazon River Region
Funerary urns have not been studied in depth in spite of the fact that they are found throughout the Amazon region. Brazilian funerary urns are the best known and most endangered of all. They are classified in four different types according to the region they are issued from: Marajoará (Marajó island), Macará, Cunani (Amapa state), and Guarita (mostly in the Urubu river).Even though scientific and chronological excavations are limited, urns can be dated from 500 to 1500 AD. Urns were used to keep ashes and human remains. They range from 30 to 85 cm in height and are characterized by a more or less globular shape and intricate geometric decoration. Marajoará or Marajó urns are globular with a wide mouth and intricate incised geometric decoration painted in white, red, and ochre with a few slightly protruding elements. Schematic human features can be distinguished, particularly human faces, and animals such as turtles, birds, snakes and figures with human and animal features. Macará urns are big and in the shape of animals and human figures. Those in the shape of human figures, which are much more common, are cylindrical with protruding arms and legs. The arms are usually folded in a forced manner and placed on the knees. The lids portray the head. Human depictions can be both male and female and they are mostly portrayed seated on stools. Zoomorphic urns are oblong with an opening in the back and four legs. They feature geometric designs and remains of white, black, yellow and red paint can be identified. Guarita urns have cylindrical bodies, which are wide in the base and represent schematic human figures with arms, legs and protruding faces. They have lids that represent a head or head-dress. Cunani urns are small, with cylindrical and somewhat globular bodies and a wide mouth. The surface shows incised geometric decoration painted in red and white. They represent schematic human figures with their faces in the neck of the vessel and the arms and legs in the body. They can also have holes in the base. 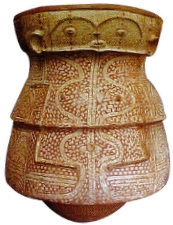