Ceremonial beakers
Keros are ceremonial beakers from the South Sierra region in Peru and northeastern Bolivia. They date from the Inca and Colonial periods. Although their dates remain uncertain, it is likely that they range from the early 15th century to the 18th century. Keros probably reached their apogee in the 16th and 17th centuries. Keros are beakers made of “chachacoma” or “lambran” (alder-tree) wood with polychrome decoration. They are cylindrical and have a wide, open mouth, concave sides and a flat base; some have a pedestal like a goblet. A few of them are shaped like human heads with schematic features or jaguar heads or exhibit these modeled depictions on the exterior. Others, very rare, are shaped like animals or like a human figure holding a glass. They average 20 to 22 cm in height. The most ancient keros are decorated with carved geometrical patterns filled with a resinous paint in lively shades of red and yellow. Inca keros have engraved geometrical patterns or bear the shape of a human or jaguar head. They are usually not polychrome and lack the intricate polychrome decoration that characterizes keros from later periods. Keros from the Inca-Colonial period, far more numerous, are decorated with painted figurative scenes. Black is used for sketching and they are painted in bright colors, mostly red or cream. Due to their antiquity, they may show signs of deterioration (cracking or chipping). The painted decoration illustrates scenes taken from Andean mythology represented in an Occidental fashion. Human figures stand singly or take part in scenes featuring plants, usually bell-shaped flowers hanging upside down, and geometric designs. Human figures represent an Inca holding a shield and weapons, standing alone, under a rainbow, accompanied by a woman or, most of the times, taking part in war scenes. Avian and feline representations are also common as well as European elements such as horses and coats of arms. The pajcha is yet another type of Inca ceremonial beaker used for libation. Sometimes it is shaped like an animal and has a long handle-like extension that channels the liquid from the container to the floor. It features the same polychrome decoration as keros and is about 50 cm long. 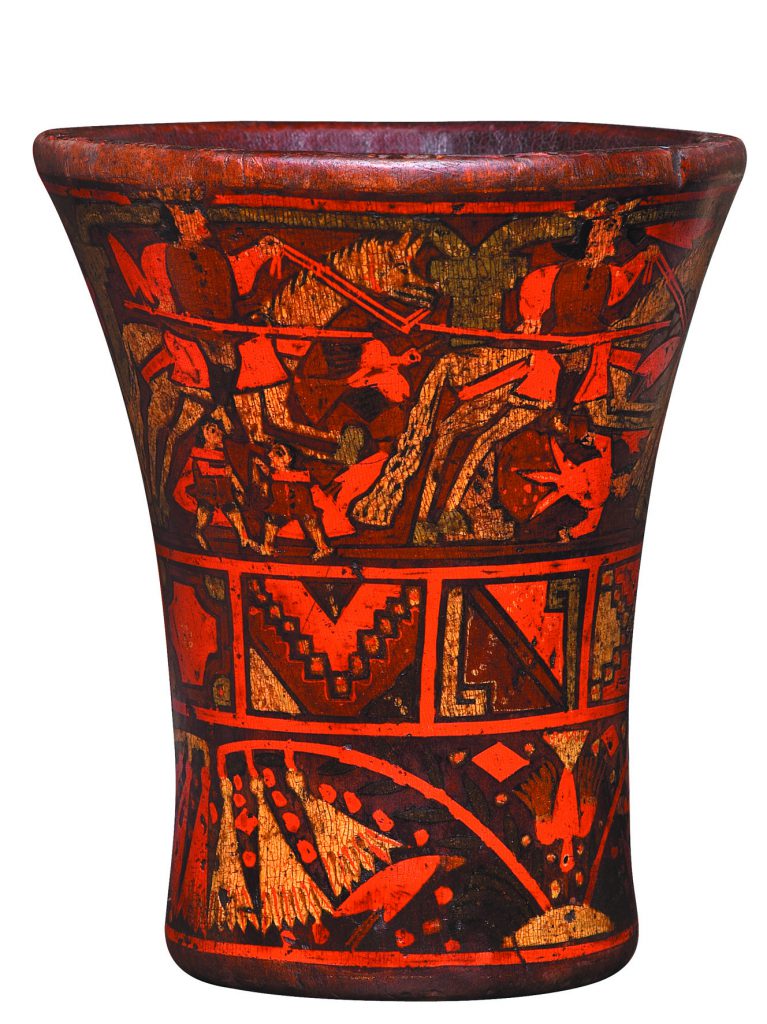 © Instituto Nacional de Cultura
We use cookies to ensure that we give you the best experience on our website. If you continue to use this site we will assume that you are happy with it.OkNoPrivacy policy