Ivory Sculptures
Ivory Christ. The great majority of religious Mexican ivory sculptures were not made in Mexico. They were made to order following European models in continental China and the Chinese settlements in the Philippines. They were then taken to Acapulco (Mexico) in a galleon from Manila and, from there, distributed to Spain and other places in Latin America. These sculptures are also known as Hispanic-Filipino ivories and sometimes even as Luso-Indian ivories (the Portuguese also made similar sculptures in their Indian colonies). There are some sporadic works that were made in New Spain (Mexico).They date from the 16th, 17th and 18th centuries. They are personal devotion objects destined to churches, convents, as well as private households, which means that private citizens and the Church are in possession of ivory sculptures. These ivories tend to be anonymous, though some are signed by Sebastian Ramirez, Juan de la Cruz, Marcos Espinosa, or Diego de Reinoso y Sandoval. There are sculpted in the round images of Santa Rosa of Lima as a nun or of Child Jesus in many positions and forms, and detailed and elaborate triptychs of religious scenes (measuring between 20 and 40 cm). Nonetheless, the figures that stand out are those of Christ on the cross, normally dying, and different moments of the Passion. The face can have oriental features. Sculpted in the round figures show the curvature, slightly or quite accentuated, of the elephant tusk. They have a height that ranges between 30 and 90 cm. They show the special characteristics of the ivory´s grain, in the form of "veins". Generally, ivory crucifixes are composed of several pieces, one for the body and other pieces for the arms. On occasions, the cross has been lost, leaving the sculptures as loose pieces or free figures. The crosses tend to be of smooth wood or with embellishments. The ivory is often left in its natural state and only crucifixion scenes are polychrome, displaying the color red for depiction of the wounds. These works of arts show signs of natural deterioration specific to this type of material: yellowing of the ivory, chipping or loss of the polychrome. 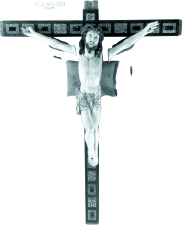 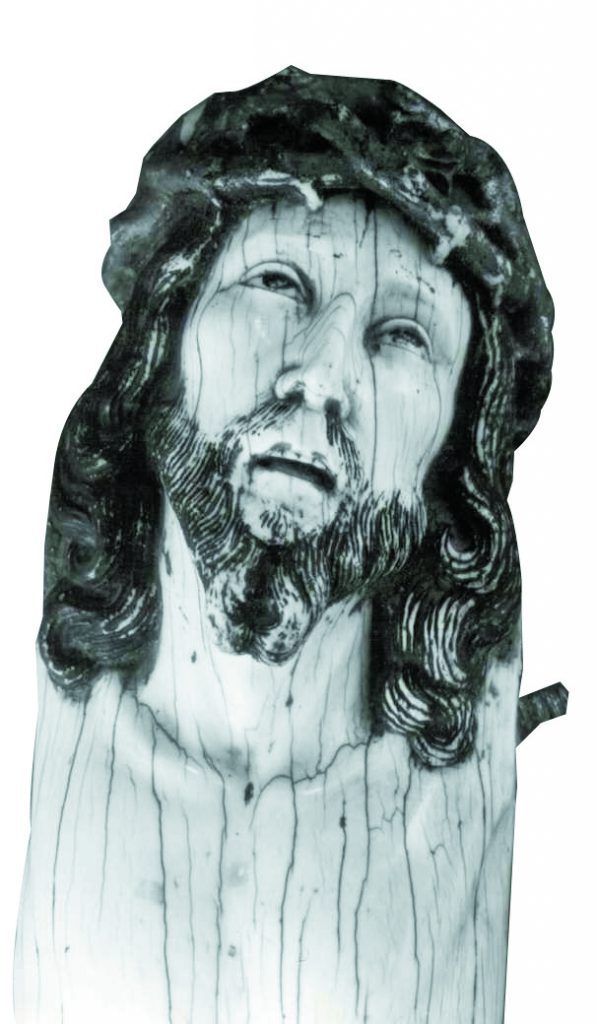