Jama Coaque Figures and Vessels
Ceramic figurines and vessels in the shape of human figures are representative of the Jama Coaque culture, which developed around the San Isidoro sector in the north of the Manabi province, Ecuador. They were crafted during the Jama Coaque culture time period, between 300 BC and 300 AD, but can be found up to 1500 AD. Most of them are issued from funeral sites. They consist of anthropomorphic figurines and vessels as well as figures attached to vessels through tubes and stirrup spouts. They measure between 10 and 35 cm in height and are found in great numbers. Their shapes vary and they are known for the refined naturalism of their craftsmanship. They portray lavishly dressed characters such as priests and chiefs, warriors, musicians, artisans, and women. Animal representations such as felines are also found but are much less common. These figures are usually bulky and have round faces with wide fronts and noses and big eyes. Particular emphasis is placed on personal appearance as they feature deliberate cranial deformations, sophisticated dress and head-dress, and a wide variety of ornaments including nose ornaments and ear spools. These clay figures were polished and decorated with applications before being painted in red, yellow, green, white and black on a white background. Sometimes, the original bright paint is still noticeable. The rest of the coast of Ecuador and northern Colombia was home to other cultures such as Tumaco-Tolita (southern Colombia and northern Ecuador), Manabi, Chorrera or Manteña which developed during the same period. The shapes and characteristics of their pottery are so similar that they can often be confused. Representations of hollow human figures, usually women in the shape of flutes or whistles with finger holes in the body and the head are common. 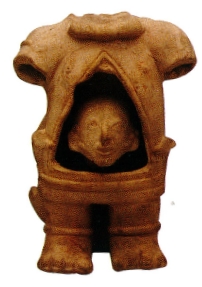