Lithics – Openwork Grindstones
Elaborate openwork grindstones dating from between 500 and 1500 AD are found in most of Central America. They are made of porous volcanic stone and constitute practical objects displaying signs of use. Their shapes and sizes vary according to the geographic zone and time period. They can be small, measuring 10 cm high and 30 cm long or they can measure 40 cm high and between 50 and 90 cm long. Grindstones have a wide concave or flat plate-like surface that was used for grinding grains or preparing food. They come with a cylindrical uncarved rock pestle. Grindstones from this zone are characterized by their intricate decoration as opposed to plain grindstones from other geographical regions. Elaborate grindstones have animal shapes. Typical Gran Nicoya grindstones (northwestern Costa Rica and southwestern Nicaragua) have a rectangular concave plate featuring a jaguar or parrot face and three pointy legs – two of them located in the back and one in the front. The head and legs display fine geometrical decoration with openwork in elaborate filigree technique. The so-called “panel volante” or “panel colgante” grindstones feature a rectangular plate and, under the plate and between the legs, a horizontal panel heavily decorated with sculpture in the round, and openwork technique. Decoration includes complex geometric motifs or animals (mostly birds with curved beaks, jaguars and human figures). Other grindstones have an oval or rectangular plate with round edges portraying a jaguar head on one side, four feline legs and a twisted tail that rests on one of the hind legs. They are from the Gran Chiriquí region in southern Costa Rica and northern Panama. There are also circular grindstones that resemble tables or ceremonial benches featuring an openwork base and edges portraying human or animal heads. 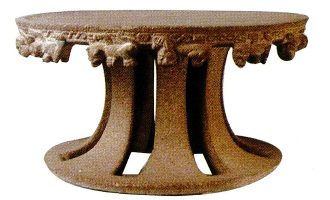