Teotihuacan Masks
The period of splendor of the ancient city of Teotihuacan, covering a surface of 20 km2 to the north of Mexico City in the state of Mexico, ranged from 200 to 600 AD when its power extended throughout central and southern Mexico, as well as Guatemala. Teotihuacan masks were crafted during this period. These pieces, which were produced in small numbers, were sculpted in precious stones such as serpentine and alabaster in green, light brown, black or white. Big pieces measure between 20 and 28 cm and the small ones range from 13 to 19 cm. All masks show the same type of face without any research of individuality. They are mostly square with rounded edges and their features are very similar: oval eyes lined horizontally, long eyebrows, straight, slightly wide noses, half open mouths which can show teeth and rectangular ears. Decorative motifs are varied although there are only a few samples left. Sometimes they are inlaid with shells or pyrite, particularly at the eye level. On rare occasions they are painted or incised at the cheeks and they also show use of mosaics. Most of the masks feature pierced ears and have perforations in the back and on the sides, which were probably intended for hanging them. They were not intended as masks since they are extremely heavy and have no openings at the eyes. 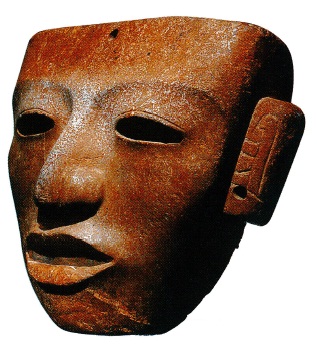