Oil Paintings – Mexican and Guatemalan
Mexican and Guatemalan religious oil paintings date from the Colonial or Viceroyalty period from the 16th through the 18th centuries. Usually, they are worshipping pieces meant for churches and monasteries in Mexico and Guatemala. Many artists are known, of which a great number are of Spanish, Mestizo and indigenous background. In the 16th century, painters such as Simon Pereyns or Andres de la Concha came from Spain and established important workshops to satisfy local demand. Second generation artists such as Baltazar Echave Orio, or third generation ones such as Luis Juarez, Alonso Lopez de Herrera, or Echave Ibia, created an original painting style at the end of the 17th century influenced by the manierist style. Finally, in the 18th century and following the baroque style, the names of Miguel Cabrera, Jose Ignacio de la Cerda, Nicolas Enriquez, Miguel de Herrera, Jose de Ibarra, Andres de Islas, Andres Jose Lopez, Juan Rodriguez Juarez or Cristobal de Villalpando stand out. Anonymous paintings also exist. They are oil paintings done on a wood or canvas base, usually linen, covered with a mixture of calcium carbonate pigmented with a red or ocher color (often seen in the deteriorated areas). Afterwards, live-colored paint was applied followed by a final protective varnish layer. The dimensions range from 5 cm to 2 or 4 m high. If done on wood, the planks tend to be smaller, whereas the oil on canvas can reach greater dimensions. Paintings over copper are usually small. They can have elaborate frames. Generally, these paintings represent religious topics or scenes, such as works related to saints´ lives, images of martyrdoms, and scenes from the Passion of Christ as well as important personalities from the Catholic Church and founders of religious orders. Nevertheless, one of the most common iconographies is the image of Virgin Mary with the Child Jesus in arms. 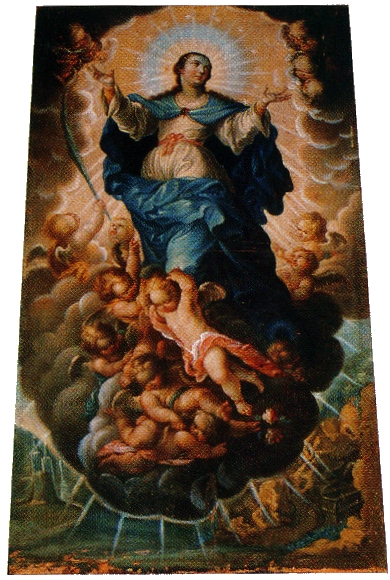 © CONACULTA-INAH-MEX
We use cookies to ensure that we give you the best experience on our website. If you continue to use this site we will assume that you are happy with it.OkNoPrivacy policy