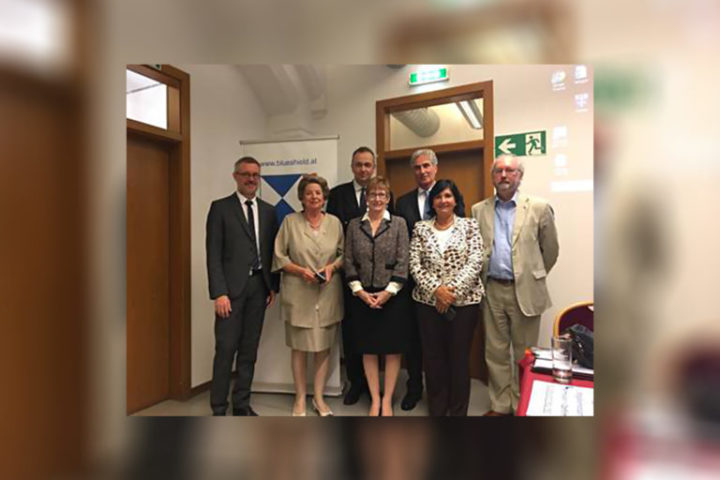 The Blue Shield is the protective emblem specified in the 1954 Hague Convention (Convention for the Protection of Cultural Property in the Event of Armed Conflict) for marking cultural sites to give them protection from attack in the event of armed conflict. The independant organisation that is named after the emblem is often presented as the cultural equivalent of the Red Cross. The Blue Shield network consists of organizations dealing with museums, archives, audiovisual supports, libraries, as well as monuments and sites.

As one of the four founding member of the Blue Shield, ICOM has devoted significant attention to preparedness, response and recovery of museums and other cultural institutions facing disasters or armed conflicts. During its long-lasting involvement within the Blue Shield activities, ICOM has been building on its 37 000-heritage-expert network to help fulfill a common mission. As the largest network of museum professionals, ICOM has the ability to mobilise high-qualified volunteers all over the world, ready to cooperate in emergency heritage protection operations. Moreover, ICOM was the first cultural NGO to develop its own Disaster Relief Task Force to support museums in emergency. Today, ICOM’s Disaster Risk Management Committee is dedicated to initial response after major natural and human-made disasters as well as during and after military conflicts.

The Blue Shield General Assembly was held on 13 september in Vienna and saw the accomplishment of an important step for the Blue Shield: the merging of the international and the national branches, ICBS (International Committee of the Blue Shield) and ANCBS (Association of National Committees of the Blue shield). A unified Blue Shield will be in conformity with the principles of the Strasbourg Charter: joint actions, independence, neutrality, professionalism, respect of cultural identity and work on a not-for-profit basis. The multiplication of attacks against cultural heritage drive the international heritage community to strengthen their solidarity and effectively coordinate international help for the protection of heritage all over the world.

During the Blue Shield General Assembly, the Chair of ICOM’s Disaster Risk Management Committee (DRMC), Corine Wegener, received the “Military Cultural Property Protection” award from Karl Habsburg-Lothringen, President of the Blue Shield. The award, an antique Austrian military sabre, honours her long-lasting commitment in cultural property protection during armed conflict. Corine Wegener, a former associate curator in the department of Decorative Arts, Textiles, and Sculpture at the Minneapolis Institute of Arts, is a Cultural Heritage Preservation Officer at the Smithsonian Institution. In 2006, she founded the U.S. Committee of the Blue Shield. She has served in the U.S. Army and her military experience and museum expertise are true assets for ICOM-DRMC’s work.