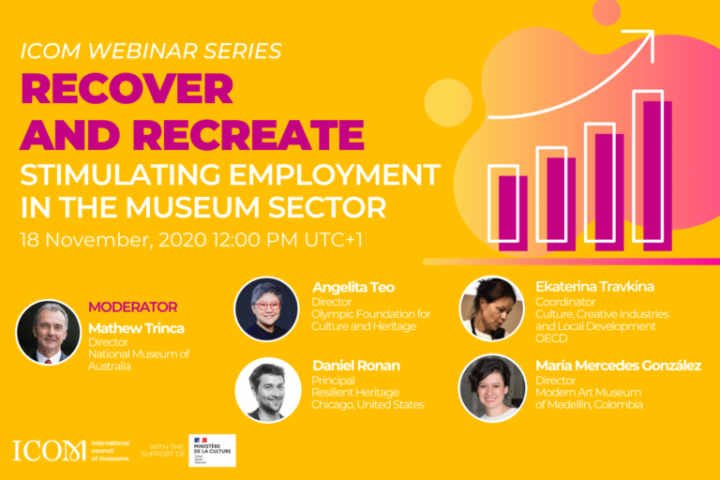 The cultural sector has been one of the most affected by the global pandemic. To comply with containment measures, museums across the world have closed their doors temporarily, leading to an unprecedented loss of income and instability in the sector. At the same time, the lockdown has accelerated rapid change and groundbreaking innovation, as museums research and transition into new business models, and prepare for a post Covid-19 era in which the barriers of the digital and physical worlds become more permeable.

As an organisation always involved in the challenges that contemporary museums face, ICOM has chosen this topic as the theme for the fourth and final webinar of our Capacity Building Series: “Recover and Recreate: Stimulating employment in the museum sector”, which will take place on the 18th of November, 12:00 PM UTC+1. The webinar will approach the challenge of rebuilding and strengthening the museum sector following the pandemic not only in terms of recovery – but also in terms of innovation and change,  supporting the creation of a future for museum professionals where they can thrive in. The session will gather five international experts in the field to discuss four main sub-themes:

The webinar will be will be streamed with simultaneous translation in French, English and Spanish.

The organisation of this project has been possible thanks to the support of the French Ministry of Culture. 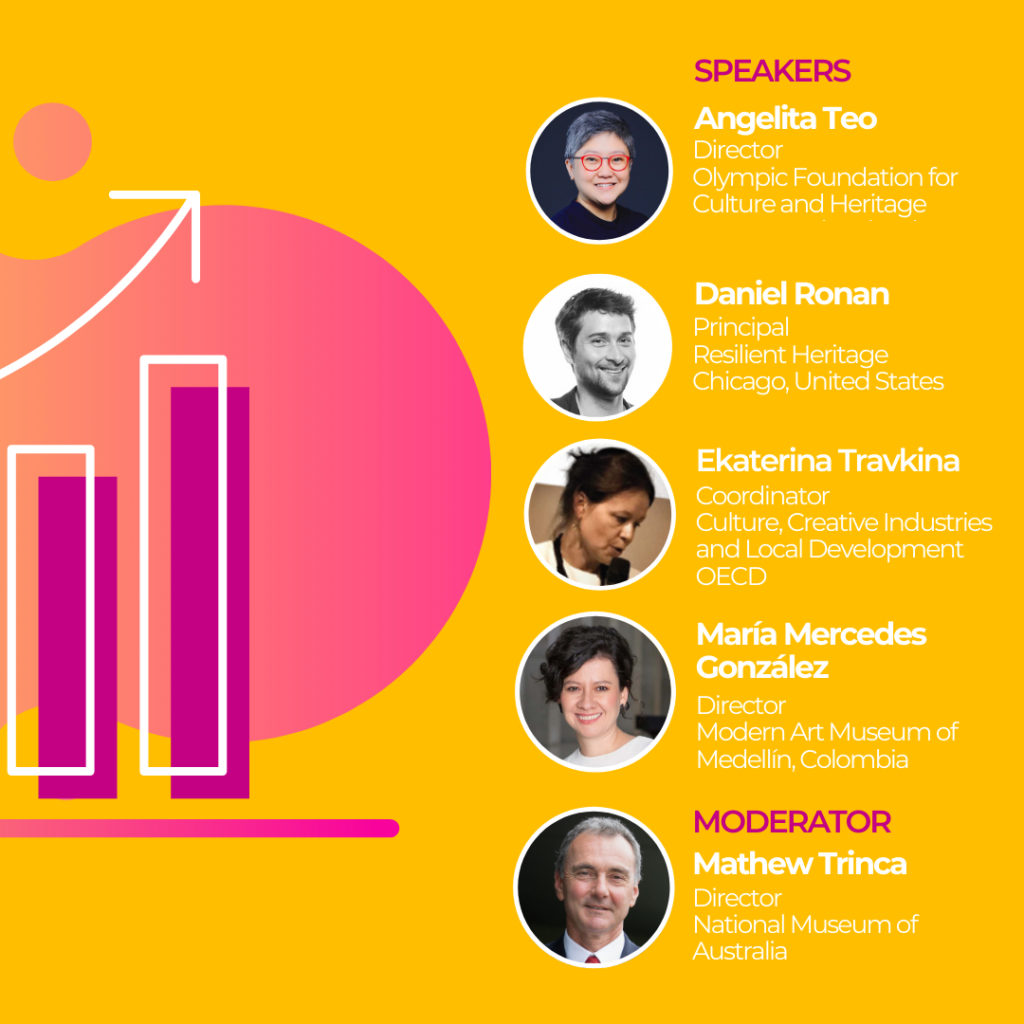 Angelita Teo joined the International Olympic Committee as the Director of the Olympic Foundation for Culture and Heritage in October of 2019. She was previously the Senior Director of the National Heritage Board of Singapore, where she was both the Director of the National Museum of Singapore (2013-2019), and Festival Director (2011-2019) of the annual Singapore Heritage Festival and the Singapore Night Festival. Angelita is a cultural administrator with more than 20 years of experience in the global culture and heritage arena, and was awarded the Public Administration Bronze Medal at Singapore’s National Day Awards in 2014 in recognition for her exemplary performance and contributions towards the development of a vibrant cultural and heritage sector in Singapore. Her expertise and influence in the cultural sector led her to be involved in several other appointments, such as a member of the Australia-Singapore Arts Group (2015-2019), an advisory Board Member of the Global Cultural District Network (2015-2019), and Chair of the Singapore’s Museum Roundtable (2016-2019).

Ekaterina Travkina coordinates the work on culture, creative industries and local development within the OECD Centre for Entrepreneurship, SMEs, Regions and Cities. Her recent work includes the OECD note on Covid-19 and Cultural and Creative Sectors. In 2017-2019, in partnership with ICOM she pioneered the work on the OECD-ICOM Guide for Local Governments, Communities and Museums. She was previously Manager of the OECD Forum on Partnerships and Local Development – the OECD’s network of practitioners in the fields of economic development, employment, skills and social inclusion.

Daniel Ronan is an arts, culture, and heritage professional based in Chicago. He brings a decade of experience in the nonprofit sector, with experience working in museums, tourism, international relations, and community development. Daniel started the Resilient Heritage blog and firm in 2014 to showcase how arts, culture, and heritage organizations communicate their benefits to society. Daniel left his work for non-profits in March 2019 to campaign for now-Mayor of Chicago, Lori Lightfoot, as the Manager of Operations, where he managed the politician’s 13 campaign offices. After campaigning, he decided to expand his practice full-time as principal in May 2019, deepening its focus and increasing its partnerships with philanthropic and governmental sectors. His chief aim is to connect people through sustained personal relationships, elevating the work of mission-based organizations. Daniel serves on several nonprofit boards, including the ICOM U.S. Committee, ICOM DEMHIST, Docomomo Chicago, an advocacy organization for modern architecture and design; and on the auxiliary board of the National Museum of Mexican Art. In his spare time, he likes to travel on Amtrak, visit museums, and ride his bike.

María Mercedes González has more than 15 years of professional experience in cultural management, communications and international relations in the public and non-profit sectors.  She has a M.A. in Media Studies from The New School of New York and she specialised in Cultural Studies and Political Science from Universidad Javeriana. Since October 2012 she is the director of the Museum of Modern Art of Medellin (MAMM), Colombia. In this role, María Mercedes was in charge of the expansion of the museum, which included a 7,200 m2 building inaugurated in September 2015, as well as the reorientation of the artistic and cultural project of the MAMM as a whole. Since then, she has led the implementation of an extensive exhibition and educational program in which more than 130,000 people participate every year. Before assuming the general direction of the MAMM, she served as advisor to the Minister of Foreign Affairs (2008-2010), and as cultural attaché to the Colombian Embassy in Argentina (2004-2008).

Dr Mathew Trinca is the Director of the National Museum of Australia, Chair of ICOM Australia, and Co-Chair of the Australia Singapore Arts Group. Under Dr Trinca’s leadership, the National Museum has developed strongly engaged national and international programs that focus on bringing alive the stories of Australia for audiences around the country and overseas. The Museum has partnerships and programs with a range of cultural institutions abroad, including organisations in Singapore, China, Japan, Vietnam, France, Germany, Sweden and the United Kingdom. A major program of work with the British Museum saw the return of early Aboriginal and Torres Strait Islander collections to Australia in 2015 – marking the first time they had been seen in Australia since their collection. Dr Trinca worked as a history curator and manager of the MuseumLink program at the Western Australian Museum, in Perth, and as a consultant historian for public history projects, including work on conservation plans, exhibition developments and short documentary films. He has a PhD in history from the University of Sydney and is a graduate of the University of Western Australia.

ICOM WEBINAR | Keeping in touch: digital transformation for museums in the time of COVID-19 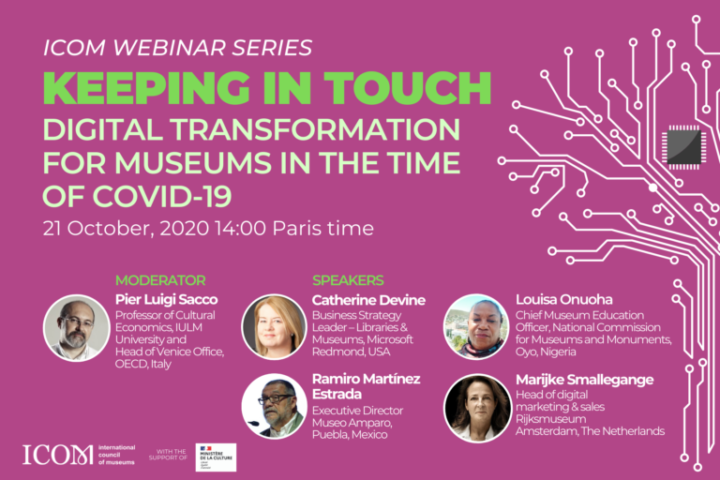 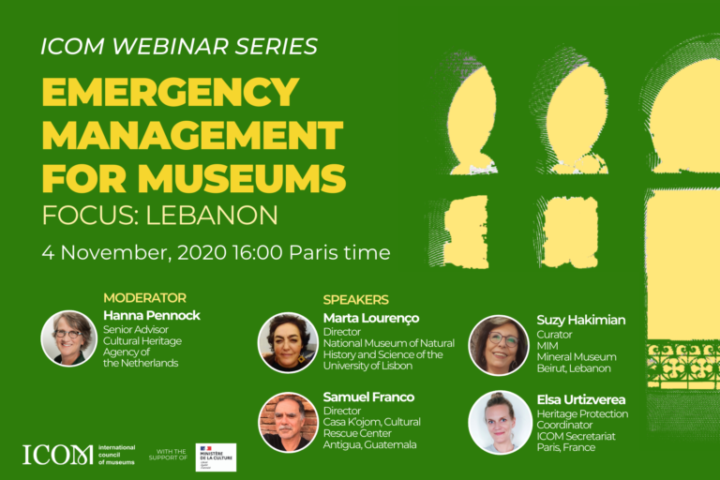 COVID-19
We use cookies to ensure that we give you the best experience on our website. If you continue to use this site we will assume that you are happy with it.Ok