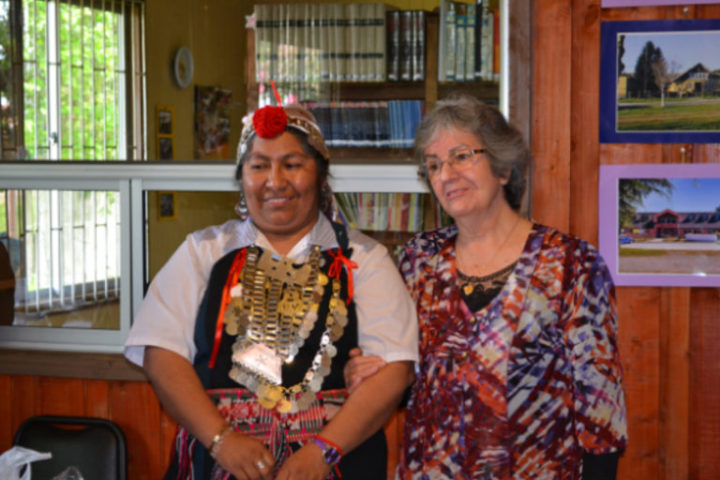 Malalhue is a small town in the Los Ríos region under the administrative control of the commune of Lanco, in the south of Chile. Its population of approximately 2,500 inhabitants mainly works in agriculture. The etymological root of the word ‘Malalhue’ comes from the Mapuche communities who live in this territory. Its meaning is associated with a ‘closed place’ and it refers to the place where waters used to gather, creating a wetland. This was used as a watering hole for local cattle herds during the summers until urban planning brought the railway to the area.

During the 1990s a community-school proposal was developed in the República del Brasil Lyceum with the purpose of rescuing the memory of the Mapuche culture and transmitting it to the community. This effort was supported by diverse Mapuche communities who, together with their Lonkos (also called community chiefs or leaders) and ancestral authorities, made possible the opening of the Despierta Hermano Community Museum in Malalhue on 12 September 1996 at the Malalhue House of Culture and under the auspices of the Malalhue Siembra Cultural Association. Objects from daily life that have been preserved and passed down for generations and then donated to this museum, have contributed to strengthening and sharing the identity of all those who are a part of the Malalhue community.

In the 1980s, the school welcomed children from many communities in the area, like those of Huillamallín, Quemchue, Huane, Quilche, and others, reflecting the diversity of families and memories associated with their territories. As Mapuche children were discriminated against in the classroom because of their names, outfits and eating habits, as well as being bullied and segregated by other students, a proposal was made to incentivise children, both Mapuche and non-Mapuche, to respect their roots and link them to their own life and coexistence. It also aimed to preserve the tangible and intangible heritage of intercultural exchanges in the family environment and amongst the inhabitants of the territory.

The project began with the organization of workshops for children, where the meaning of the different objects was used to research and compose the history of the locality, particularly the history of the native peoples (Mapuche) and the migrants who came to the territory as the railway, timber industry, and services developed. Hence, the collection, which currently makes up the museum exhibition and provides life to the narrative, is a set of artefacts that have either been made by the students who participated in the workshops or donated by their families. This encouraged the practice of valuing the objects based on the appreciation of the maker, their origin, or their shared meaning amongst the members of the community, thereby generating a new approach to community heritage. The workshops led to the proposal of an exhibition space that builds the memory of the Malalhue families and areas for participatory dialogue.
The Despierta Hermano Community Museum in Malalhue, which will celebrate its 24th anniversary in 2020, remains under the leadership of Nerys Mora Contreras, who continues to organise a variety of community activities with the same enthusiasm and dedication in order to project and build meaning and memory around the Malalhue community.

Projecting the future from traditional knowledge

The so called ‘cabildos’ were organised to highlight the value not just of the objects, traditions and historical context, but also of the territorial sense. ‘Cabildo’ is a concept of Latin origin frequently used during the colonial period, when American countries were ruled by Spain. It was an official body, representative of the community, whose role was to protect the common good and the proper functioning of a territory. This inclusive methodology has enabled us to know and understand the narrative and meaning of each of the memories related to social actors, economic activity and traditions, as well as the different ways in which Malalhue people coexist in harmony and respect, preserving the strength and cohesion of their identity. These encounters were suggested by the inhabitants of the community themselves and promoted the development of open dialogues and reflection around the essential elements that traditionally represent life and the sense of place: water, forest and wood. As part of the process, it is worth highlighting the role of Isabel Riveros Quilacán, an intercultural educator who engaged with the project from its very beginning and generously conveys, in each of her guided tours and activities, the sense of belonging through understanding and through her own story as part of the Malalhue community.